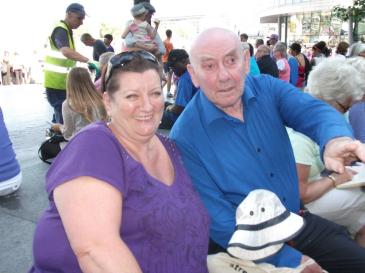 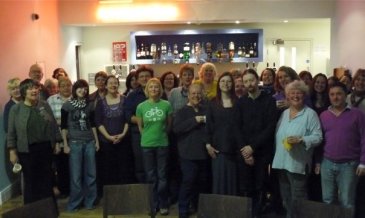 Picturehouse Choir began at the iconic Band on the Wall in Manchester in Autumn 2009 as part of their learning and participation programme.  The choir was set up as a natural voice acapella group, singing songs from around the world, all taught in the aural tradition.  Open to everyone, Picturehouse had no auditions, no necessity to read music and was intended to give performance opportunities to anyone who wanted to sing in a friendly, social and fun atmosphere.

From the beginning, the choir was led by Jules Gibb, an inspirational musical director who has been teaching, performing, running singing workshops and directing educational vocal projects in Manchester and beyond for over 25 years.  Jules and Picturehouse were made for each other and soon attracted a diverse and lively group of people to sing everything from pop songs to gospel, from standards to West Gallery, music from Africa, Europe and  the U.S.A.

The choir ended each term with a performance at Band on the Wall, sharing the stage with other local acapella choirs including Manchester Community Choir, WAST, Kadenza Womens Choir and Golden Voices Community Choir.

In Autumn 2010, members of the Picturehouse Choir took part in Sing for Water in London, an annual event that raises money for Water Aid.  Inspired by their experience, they decided to put on an event the following summer in Albert Square in Manchester, and Sing for Water North was born.

Picturehouse Choir also became part of the national family of natural voice/acapella choirs through its participation in the annual Street Choirs Festival, attending and performing at festivals in Whitby, Bury and Hebden Bridge, along with other choirs from all over the U.K. Through contacts at the festivals, the choir also became part of the Campaign Choirs Network, giving some members an opportunity to take part in various demonstrations and campaigns to provide vocal choir support to the campaign.

Sadly, in summer 2015, Jules retired and members of the choir had to look to the future.  Whether to continue with another Director or to move on to something different?  Picturehouse Choir was run (administratively) as a course, rather than as a community choir, and its members had no control over the way the choir was run which had led to increasing frustrations; these frustrations had never fully come to the surface, but now the possibility of what had become our “singing family” breaking up was very real.  Someone tentatively put forward the idea of forming a new choir and Quarternotes (for a period we were called Offthewall Choir) was born.

Our core “singing family” is still together as Quarternotes and we have acquired and welcomed new choir members on the way. We still participate in Sing for Water North and in the annual Street Choirs Festival.

Those of us who were lucky enough to be part of the original Picturehouse Choir can look back on very special times.  As Quarternotes have we moved on, but we remember our journey fondly. 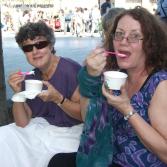 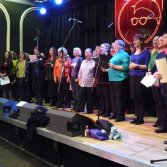 Performing in March 2010 Image © Band on the Wall

The gang at Sing for Water

At More London for Sing for Water London 2011

A number of the people in this picture from March 2010 are still members of our singing family today. Image © Band on the Wall

Picturehouse’s youngest member who brought the ‘multi-generational’ to Picturehouse! at Sing for Water London 2011